The controversial pink sculpture proposed to go up on the median on Jackson Avenue appears to be a done deal—despite the director of the city agency in charge of the project saying otherwise.

Sara Reisman, the director of Percent for Art, assured Community Board 2 members Thursday that their feedback would be taken into consideration in terms of the 8 ½ foot magenta-pink sculpture.

Despite her assurances, Reisman said that a sculpture will be placed at the 43rd/Jackson Ave location no matter what– and that the artist selected won’t change. During the evening, when board members made suggestions as to the color and scale, she said: “We aren’t in a position that we can say to an artist that you must do this?”

Joe Conley, the outgoing chairman of Community 2, asked Reisman if the sculpture in the rendering was going up on the site. Reisman said in one word “yeah.”

“So it’s a fait accompli,” Conley said, referring to sculpture—called the Sunbather– that will cost taxpayers $515,000.

Reisman said that it was not the case. She said that the sculpture still has to be reviewed by the Design Commission and the community board’s feedback will be included. “So give us feedback and we will work with it.”

However, the community board’s voice appears to be limited. The board only plays an advisory role in the selection process since it isn’t a voting-member of the panel that selects the artwork. Furthermore, with this project, a board staffer did not notify members of the board until late in the process that a sculpture was even going up at that location.

The panel, which voted on the project, was comprised of a representative from City Planning, Department of Transportation, Economic Development Corp and three local arts experts.

The initial rendering of the 8 ½ foot tall bright pink sculpture—made out of bronze–has undergone a slight change since it was unveiled at the community board’s Nov. 19 Land Use Committee meeting, which was published on this site.

Reisman said that the rendering would continue to change.

However, Pat O’Brien, the incoming Chairman, said it is very difficult to provide feedback on a rendering that will continue to evolve. He said that the community board needs some parameters as to how much it will change.

The artist Ohad Meromi, who was in attendance, said he selected the bright pink color because he believed it would take the concrete edge off the area and would make up for the shadows from the tall buildings. However, he said that the shade of pink and the scale might still be modified.

The panel liked his concept of the body in repose—as well as its scale.

“The sculpture will start off bright pink but will look better with age,” Meromi said. 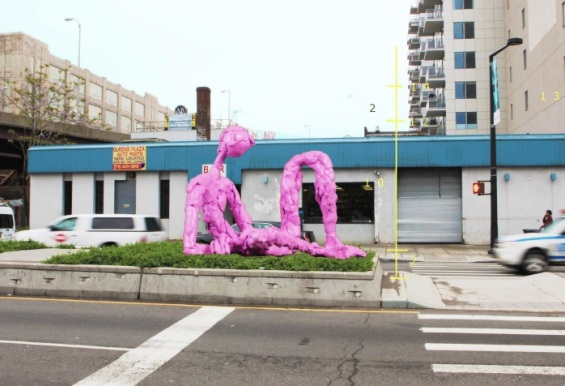 Rendering from three weeks ago

Well, I have to agree with you. This certainly isn’t the message we’d like to send, and most of us will be embarrassed when visitors see this. I do think that this statue will give people the impression that we have more money than sense in this neighborhood. The way that it is being forced upon us is a sad story that will be forgotten in time, but the monument to poor taste will remain.

This work of art is a message from the citizens of LIC to the world, and that message is: “We have no common sense whatsoever.”

I’m all for public art, but when the sidewalks in the neighborhood are so badly damaged you have to pick your way through, we don’t have a library in Hunter’s Point and the artist isn’t even from Queens…UGH.

Again, how are they able to spend our taxpayer money without giving taxpayers a vote? And how did the cost of this eyesore go up another $65k in the last two weeks!? (last quoted at $450k)

How do we protest this monstrosity? A sit in so they can’t install the stupid thing?

ps – How do you not pick a Queens Artist for a Queens Community installation?

I was happy to read the the artist feels the sculpture will look better with age just like a fine wine. Perhaps we can drink it in a few years.

It’s hilarious that even the sculptor admits it looks sucky! It “will look better with age,” he promises, not especially convincingly.

C’mon, buddy, sound a little more enthusiastic! What do you want, another 100 grand for your pile of pink turds?

You know the emperor really has no clothes when even the liars can’t bear to keep up the lie anymore.

What if we reject we have no say, tear it down, sell the bronze as scrap metal, and donate the proceeds to our ailing schools?

Sara says what she said just to hold on to her job. If she does otherwise she would be axed. This is an abomination and a shame to all in LIC and the artists of LIC. Shame on you board members for sneaking this in here. Pyres my name is Mark Christie and there is so much that we could use this money for. Kisses

I’m all for public art, but for an area that seems to be in need of repair, one would think this money could go towards creating a green space or sponsoring a community event that would help bring business to the area. I don’t see how spending taxpayers money on this is project is beneficial.

The site selected is also pretty weak. For half a million dollars, I would prefer to see this in an area where people actually hang out, not simply plopped on a median. This isn’t Park Ave, isn’t not a high traffic area.

As for the sculpture, this doesn’t respond to the context (sure the pink stands out), but so does any color when compared to concrete. Is this piece about movement or light and shadow? Is it about perspective and how one views it from different moments? Unless I missed something, there’s not enough description to help support the proposed design. It simply feels as if this piece was designed and then dropped on site.

Lastly, why not have an open competition if your going to spend taxpayers money and let the community vote? Who knows, maybe the pink panther will win!

$515k in taxpayer dollars?!!!! For the ugliest sculpture ever conceived? And we have no say over this?? Where is the outrage? Use that money for sidewalk repairs, improved lighting, or TREES FFS!!

How can the community prevent this? This is a complete waist of our tax dollars that would be better invested in schools and infrastructure. Nobody needs this ugly piece of useless art. It boggles my mind that they are trying to force this on us.