Renowned Irish pub The Shannon Pot has re-opened its doors in a new permanent home in Long Island City after years of relocation.

The bar and grill opened at 10-50 44th Dr. two weeks ago, ending five years of conducting business in temporary locales throughout the neighborhood.

The new bar has the same look and feel as its original bar at 45-06 Davis St., with much of the original decor, including its tables, stools and bar.

A spokesperson for the Shannon Pot said that the new location “is very similar to the old Shannon Pot, perhaps just a little bigger.” The Shannon Pot when it was located at the corner of Jackson Avenue and Davis Street (Photo: Queens Post)

“We’re very happy to be open again in Long Island City and to have a lot of our old customers coming back, as well as lots of new customers. It’s nice to have a home after years on the move.”

The Shannon Pot was founded in 1999 and had been located on the corner of Jackson Avenue and Davis Street for 15 years prior to its initial relocation.

The bar was forced to move from its Jackson Avenue spot in 2014, after operating without a lease for years. The old bar site was then demolished–along with the 5 Pointz building– to make way for two residential towers currently being developed by Jerry Wolkoff.

The pub found new digs at 21-59 44th Dr. but was forced out of that spot in 2018 to make way for a seven-story, 20-unit apartment building as Long Island City’s real estate frenzy continued to cause havoc for the Irish pub.

The latest move marks a new beginning for an establishment that has endured years of uncertainty. 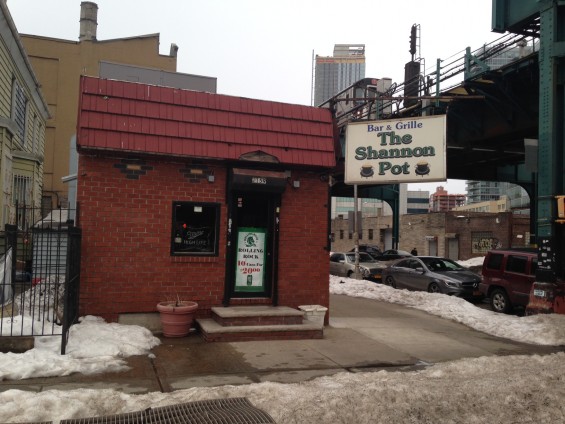 The Shannon Pot was previously located at 21-59 44th Dr. but was forced out due to development (Photo: QueensPost)

I’m not saying this took long to re-open, but Judge Crater was seen having one of the first drinks.

What makes this a permanent location? Did they buy the building? Otherwise it is just another change of location.

It’s like someone who got married for the fourth time saying this time it’s forever.

The Shannon Pot was sorely missed. Happy to have it back in the neighborhood. Can’t wait to make many more great memories here.

Nice to see an old staple of the neighborhood re-open. Hope they don’t get pushed out by construction anymore.

Agreed, you gave so greedy developers so much power by voting for Trump that it threatens local businesses

I believe it was destroyed before it could be removed.

Staff at the 44th Drive location, came out during a freezing, dark winter evening, 2014, to help my husband, who’d slipped on ice. They helped him sit up, called an ambulance; took care of him. I’ll never forget their goodness. Tip: don’t wear white tennis shoes in icy temps.

Tip – tell him to stop drinking!

How do you know he was drinking?

Why are there so many thumbs down? Is it because she said tennis shoes instead of sneakers?

Re, my husband receiving kindness from the staff at the Shannon Pot. 1. An artist, he wore his summer tennis (studio) shoes on his way home from his studio, forgetting to put on the boot right by the door. 2, He didn’t drink, except that occasional Jim Beam at home. Headline: “LIC artist Saved by Caring Shannon Pot Staff.”