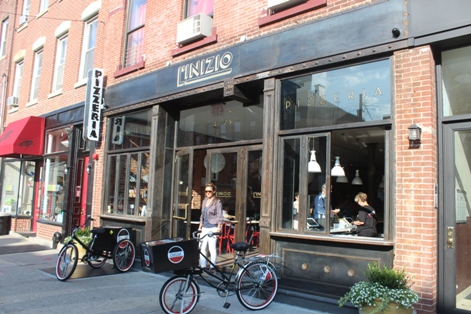 A Vernon Blvd pizzeria is calling on the community board to allow it to serve alcohol to customers who use its backyard space.

Currently, L’inizio is permitted to sell wine and beer but its customers are not allowed to go to the back garden area to consume it.

Tom Blaze, the owner of L’inizio, presented the committee with nearly 2,000 signatures last night and told board members that everyday his customers ask him why they can’t drink in the rear yard. He said he tells them that the community board decided against it when he opened in 2014.

The rear year is a 600 square foot space that has five tables and 22 seats. Much of the outdoor space is dedicated toward growing tomatoes, basil and peppers–ingredients used for the pizza.

Blaze’s application to use his rear yard space in this manner is unlikely to be straight forward since this has been a contentious issue for years.  Many Vernon Blvd. bars/restaurants are located next to apartments, and residents have to contend with noise.

When Blaze applied two years ago, Assemblywoman Cathy Nolan stepped in issuing a letter in opposition to his application concerned about the precedent it might set. Several bars/restaurants with backyards on Vernon Blvd have opted to keep them closed in order to avoid conflict with the community board.

Pat O’Brien, chairman of the City Services/Public Safety committee, said that a public hearing will be held in Hunters Point within the next month to determine whether the community is comfortable with L’inizio using its backyard as a place where people are permitted to drink wine and beer.

O’Brien claimed, however, that L’inizio had already been allowing its customers to drink in the rear yard, in violation of its existing agreement. He said that he had seen people consuming alcohol in the backyard with his own eyes on at least two occasions. Blaze refuted O’Brien’s claim and said he stops all customers from going outside with alcoholic beverages.

O’Brien was baffled by Blaze’s response and said his eyesight is good.

O’Brien acknowledged that the neighborhood was changing in terms of its views on outdoor space. He said that a public hearing would make it easier for the board to make a decision.

Stop crying about your beer and pizza, there are people on food stamps that need your support. Care more about them than yourselves once in awhile.

Pat O’Brien needs to get a life. He’s a liquor attorney but yet is the board president because his buddy Joe Connley passed him the torch without any outside applications even being considered. Sounds like collusion to me. He shouldn’t even be determining who gets to use what space at all.
The board needs to set term limits and allow new thinking and new blood to make unbiased decisions.
Restaurant owners spend a fortune to open there establishments and shouldn’t be chastised by high salaried lawyers like O’Brien and Nolan. How come you guys don’t help all these restaurants pay there rent each month they are losing revenue on the space?????

Never met a lawyer I liked.

It’s true what Anonymous said. There are a few bad establishments and everyone else has to suffer. Beer and wine with food shouldn’t even be a question. It’s the clubs that are the issue. The strip on 21st street and the comedy club on Vernon seem to be the real trouble makers in the neighborhood. The 108 should squeeze them to clean up their acts or force them to surcease. Restaurants should be allow to operate and then if there are issues be given an opportunity to correct those issues. CB2 does it all backwards

Agreed. Ridiculous that a pizza place can’t allow a customer to sit outside and have a slice and a beer. People don’t go to pizza places to get wasted and make noise. Petty. Lame. Out with the old, in with the new.

All of a sudden he is going to follow the rules? I have seen people drinking in his backyard also. And his illegal tables on the sidewalk. Not every bar is an appropriate venue for backyard drinking. There are plenty of sidewalk cafes, and a few backyards to choose from. Owners, do your homework before you sign a lease. And please stop whining.

There are a ton of yards to eat and drink in over in Greenpoint. Some of us would like to give our money to local businesses.

Cathy Nolan needs to disappear from our lives! She and Pat O’Brien need to get lost and fall off a cliff. They’re pathetic.

I hope we get our first yard this summer! Free the Yards!

Mr. O’Brien has been terrible for the honest people investing lots of money in the neighborhood. We should be looking to make it easier for them to flourish here. It’s that ridiculous standing room we should be cracking down on. With all the drinking on the street and drugs, that they should look harder at. I see it all from across the street. One night a crazy guy on drugs came out of there and it took 3 cars full of officers for cuff him and eventually take him away strapped to a gurney and carted away in an ambulance. They should pull that liquor license. Tom is going to follow the rules, no question there.

Maybe he was upset because he couldn’t eat in the backyard.

I agree 100%. Vernon is a main strip and this is what living in NYC looks like.

I hope Tom and L’inizio are allowed full use of their space. The back-and-forth from Mr. O’Brien is petty and unprofessional and completely beside the point. I’m embarrassed for him.

For those of you bemoaning the towers and lack of infrastructure, remember that it was these same Community Board 2 members who were so worried about someone having a beer in the backyard of a restaurant while permits were being issued and their pockets were getting fat with their real estate holdings.

Agree, but nothing is going to change until the non-dinosaurs start showing up at CB2 meetings and making their voices heard.

Now if he’d only improve that lousy pizza. Then there would be a reason to eat it outdoors.