The Green Street LIC, the organic, gluten free Korean BBQ spot that opened in 2016, has refreshed and updated its menu to include a number of dishes made with ingredients repeatedly requested by diners since their opening.

Katherine Oh, owner of the The Green Street LIC at 10-39 47th Rd., said several dishes that patrons would request substitutions for, ranging from soups, gratins, and desserts, are now permanent menu options. 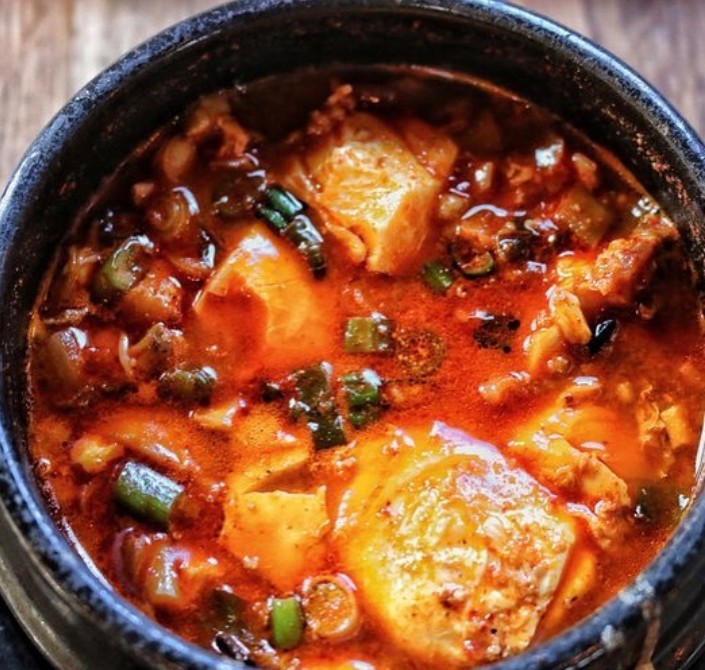 A vegan-friendly, spicy soondubu stew, for example, is one of the newest additions to the menu.

The stew, one of their most popular dishes, was initially listed with seafood and pork options only, but diners consistently ordered vegan variations of it. The result is a dish made with organic tofu, homemade gluten-free red pepper paste, mixed vegetables, and served with an optional egg. The seafood and pork variety, however, are still available.

Another addition to the menu is over-roasted organic cauliflower gratin, a vegetarian-friendly option  baked with creamy gluten-free cauliflower bechamel.

The Green Street LIC’s dessert menu also has a new item made especially for diners following a strict vegan diet–a dark chocolate chia pudding, made with non-dairy dark chocolate and coconut, is now available for an affordable $5. The chia pudding also comes with organic fruits and homemade grain-free granola for just $2 more.

Apart from the mainly vegetarian and vegan options highlighted in the additions, Oh has also focused on bringing new items like truffled eggs and house-cured salmon and a pork belly Cuban sandwich. The truffled eggs are served with crispy bacon, red onion and chives on Parmesan crusted peasant bread, while the Cuban sandwich is made using  a thick slab of Korean barbecued pork belly layered with swiss cheese or a vegan substitute, and served on butter toasted organic ciabatta bread from the New York-based Bread Alone Bakery.

Oh emphasizes that her restaurant has prided itself on using organic ingredients since its opening, and has gladly prepared dishes with substitute ingredients and other requests as made by her customers. “Everything is organic. We don’t use any white sugars, opting for coconut sugar instead,” Oh said. “We also don’t use traditional soy sauce, but instead use organic gluten-free tamari.”

Their gluten-free Korean Fried Chicken Kimchi Waffles are also a hit among diners. Served all day, the waffles are made with tapioca starch and almond flour, and are served with paleo-friendly Korean fried chicken or a tofu substitute. The Green Street also serves cold-pressed juices, Their popular “Essential Greens” drink, for example, is made with kale, romaine, parsley, lime, cucumber, celery, green apple and ginger. Another drink called “Cold Buster,” designed to boost the immune system, is made with orange, carrot, ginger, and citrus tea. Customers can also create custom-made drinks using all the fruits and vegetables available at the site.

The Green Street‘s organic mission even extends to their full liquor license, where half of all available liquors are organic. Their wine selection alone is 100 percent organic, according to Oh.

For information on reservations and their event space, e-mail [email protected].

My family really likes this place, especially for breakfast. I have some advice though… please get some drink options for people that don’t want some green smoothies or fresh juices. San Pellegrino soda options please! Anything! I am so thirsty!

The food is tasty at this place but the owners should be aware that the lack of ventilation discourages customers. It can get quite smoky in that back area.

no offense as I do enjoy this place sometimes, but there is nothing Cuban about that sandwich. Ciabatta, really?

My recommendation is to not expect authentic Cuban at a Korean restaurant.

Pizza should only be called pizza if its made by a Neapolitan granny. Any modern interpretation should be called circular bread with savoury toppings.