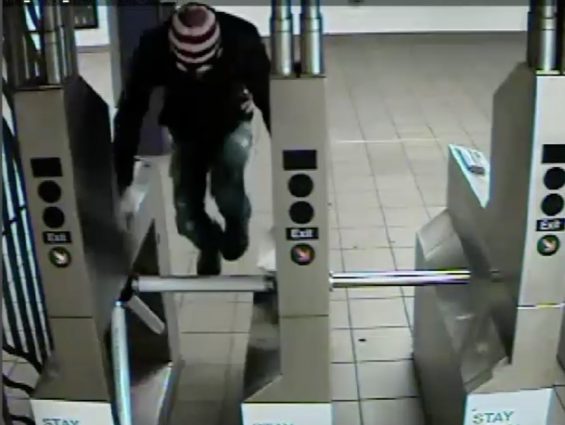 Screenshot from video released by NYPD

Police are on the lookout for a suspect who allegedly shoved a uniformed NYPD officer to the ground after she stopped him for jumping the turnstile at the Queens Plaza station in Long Island City.

The incident happened at around 12:35 a.m. on Nov. 14, where a man entered the station’s mezzanine and avoided swiping a Metrocard by hopping over, police said.

An on-duty, uniformed NYPD officer stopped the man and began to talk to him, but was shoved to the floor by the turnstile-hopper as he ran away, according to police. The officer got back up and chased him, but the man had already boarded a northbound train, police said.

The officer was sent to a nearby hospital after sustaining injuries to her back and left hand, according to police.

The suspect, seen jumping a turnstile in the attached video released by the NYPD, is described as an Asian/Pacific Islander, between 20 to 25 years old, either 5’5” or 5’6”, and weighing 150 pounds. He was last seen wearing a red, white and blue winter hat, a black leather jacket, and blue jeans.

Anyone with information in regards to this incident is asked to call the NYPD’s Crime Stoppers Hotline at 1-800-577-TIPS (8477) or for Spanish, 1-888-57-PISTA (74782). The public can also submit their tips by logging onto the Crime stoppers website at WWW.NYPDCRIMESTOPPERS.COM or by texting their tips to 274637 (CRIMES) then enter TIP577. All calls are strictly confidential.

Joe jitsu not there. If I there I stop him.

Witnesses said that the tiny suspect was wearing a straw hat and was overheard saying to the cop, “How about a nice Hawaiian Punch?”

Let’s be clear: a cop was shoved and will now attempt to draw a full disability pension for life.

The tip-off is the “back injury”.

Welcome to the big city:

3/4 disability pensions are tax free and highly sought after by city union employees, that’s always been the case. The problem with reducing the benifit to make it less desirable and have fewer people ‘chasing’ the money is that those that truly are disabled get their benefit cut to curb those that embellish and scam.

Well you can thank your Mayor for this, since jumping the turnstile is no longer a crime along with many other crimes he deems no longer punishable by law!

jumping the turnstile is still a crime. NYPD is trying a different approach from automatic arrest. Also, not sure how that matters in this case. An officer trying to arrest this person would still have to approach the suspect at which point he would shove again. or do u think the cops should treat every citizen as a potential criminal, with guns drawn for every interaction?

That is completely false, you will be issued a civil summons and fine the first time, any times after that will be a DAT and court date.

Maybe if you had any knowledge of the facts at all you wouldn’t be so outraged.

It was a small female cop