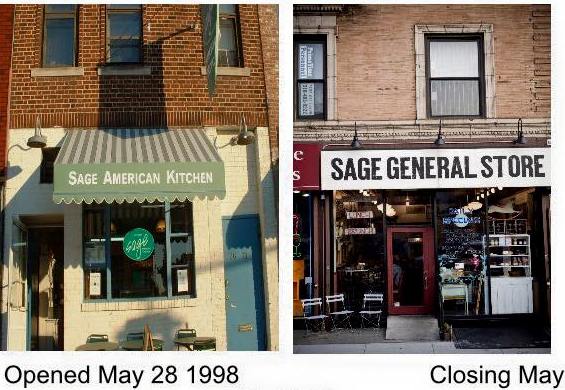 A popular Court Square eatery will be closing for good this weekend after being in operation for 18 years.

Leslie Nilsson, the well-known owner of Sage General Store, said she is closing up after being unable to renew her lease at her 24-20 Jackson Ave. location. Her last day is this Sunday, May 29, and she said she will be having a “blow-out farewell” between 4 p.m. and 7 p.m.

“Thank you for 18 years of loyal support!” she wrote in an e-mail to her friends yesterday.

Nilsson was an early pioneer to the Court Square district when she opened in the late 1990s, when that stretch of Jackson Avenue was still home to several empty old buildings.

She established her business in 1997 under the name Sage American Kitchen and opened the next year at 26-21 Jackson Ave. It was a quaint three-seat take-out shop at the time.

The building was later acquired by Rockrose and she moved a few blocks to her current location.

At her initial location, she built a reputation for offering farm-to-table, locally sourced food. She built her catering business out of the kitchenette and also used the space for baking. She had an office and an employee living in the building.

“At the time, I would see prostitutes on Purves Street lifting up their skirts in broad daylight,” Nilsson said, recalling what the area was like when she opened. “When we were baking the rats could smell the food and there would be giant ones looking in trying to get into the building.”

Nilsson said business was tough at the time. She said that Silvercup Studios played a big part in keeping her business alive when HBO’s “Sex and the City” and “The Sopranos” brought a hungry cast and crew. There were also many Citibank loyals.

In 2008, Nilsson moved across the street to her current space where there was more seating and a more extensive menu. She changed the name with the help of her late husband to Sage General Store since it sold artisanal products such as honey and folk art.

The new location also provided her with additional space to expand her catering business, called Bartleby & Sage, which she plans to continue. She plans on finding new space, with an expansive kitchen, for that company.

Nilsson, who lives in Hunters Point with her daughter, said it’s important to close her eatery on a positive note.

“I am still going to be around but my focus will be on the catering business,” she said.

Sorry to see you close hope to come to new location when you open .1

Please open somewhere in Connecticut. Wilton or Ridgefield would welcome and support you.

Broke my heart that they closed, Andi am willing to help in any way if she plans to open a new location!!

Sad to hear about closing. Great breakfasts with all types of bacon. Travelled from Westchester County just for the breakfasts.

I’m sad to hear Sage General Store has closed. Looks like another place Guy Fieri visited has but the dust. “The Guy Fieri Curse”

Sorry but the food here was just not good. I think the lease thing is just an excuse for the owner to refocus.

In addition, DeBlasio is a good man and I’m proud to participate in numerous circle jerks with him and other political members. DeBlasio will always have my trust and handy support. He is a great bowler with a strong draw.

To whom it may concern. The JOKER who has hijacked my MRLIC handle wrote the post about DeBlasio & the bowling alley at 10:03 AM on 5-26-16.I did not frequent the Sage General Store, but am sure some will miss it.

That is truly sad. I never actually got to try that place. Tried to order numerous times but opened at 11:00. Too late for breakfast. The one time I went there, the line was huge and we left.

Thank you for feeding me throughout my college years, my pregnancy and during my divorce proceedings. You will be missed!

Wow. End of an era. Sad to see you go! Spent many a Sunday afternoon there.

Unfortunate, but as I’ve said over and over again, you gotta have more than just brunches and experimental menus…..Ive witnessed Sage go from good hearty food to this “bacon brunch” thing and those weird dinners. It will not work!

Apparently you didn’t read the article? It said they were unable to renew the lease. That being said, the Court Square Wine store was for lease a few months back. Asking rent was $12,000 a month. Leasing was handled by Modern Spaces. So for all of you who continue to think so highly of them, think again.
They have brought multiple tenants into the area at astronomical rents. They sell new developments condos 75% of the local residents can’t afford to buy. The list goes on

Pardon me – Square wine asking rent is $15K a month.

What local establishment could afford that?

Loved them when they were Sage American Kitchen on Purves st. Much more affordable!!! Still it’s sad to see them go!

Definitely a shame. They had the best BLT in queens! Will definitely miss this place. Unfortunately the place hasn’t been the same since Leanne left!

This is DeBLAHsio’s plan to punish the poor people of LIC. Hopefully a bowling alley moves into this new vacancy.

Obviously gentrification started under DeBlasio. None of that kind of thing would ever happen in the three terms of billionaire Mike Bloomberg. Mayor Mike was known for standing up to developers to demand inclusion of affordable housing…oh wait.

This is a complete joke. This Mayor has done nothing but put small businesses under. Small companies are closing at record rates due to his anti business policies. Also, as everyone now knows with his 7 corruption scandals, you need to pay a lot of money to de Blasio to get any type of contract with the city.

“Broken windows” a proven success just reversed by the dynamic duo, Deblaze and the City Council…….. Can you imagine how desperate one must be to allow NYC to return to the ashes of the 70`s with the hope of gaining the votes of degenerates, WOW !