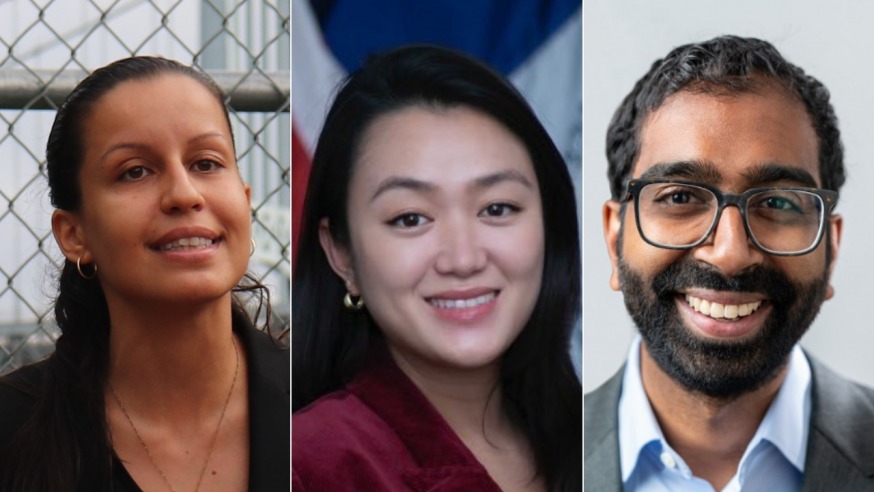 Three Queens Councilmembers are co-sponsoring a bill that would abolish the NYPD’s gang database.

The bill, which is being co-sponsored by Queens progressives Tiffany Cabán, Julie Won and Shekar Krishnan, would end the database and prevent the police department from compiling a replacement.

The NYPD’s gang database is a police resource tool containing the names of alleged gang members and other intelligence relating to street gangs. It is estimated that there are around 18,000 people currently listed on the database.

In a 2021 report, the NYPD stated that the database is a “critical component of modern policing and an invaluable tool for detectives investigating crime.”

Supporters of the legislation also say that people with no ties to gangs have been placed on the database and there is no way for them to get their names removed. They say that this can often lead to intensive surveillance, police harassment, overcharging, increased bail, risk of deportation and prejudicial treatment in court.

“The gang database is nothing but a dragnet to surveil and criminalize Black and brown New Yorkers, especially youth,” Cabán said in a statement to the Queens Post.

“It does nothing to reduce violence and plenty to intensify the horrors of the criminal punishment system.”

Cabán, a former public defender, said she has witnessed prosecutors weaponizing the database to coerce false confessions from people.

“Kids on this list for as little as wearing the wrong colors in the wrong place are threatened with gang conspiracy charges, and more,” said Cabán, who represents the 22nd District in western Queens covering Astoria, Rikers Island and portions of East Elmhurst, Jackson Heights and Woodside.

“We must eliminate the gang database and prevent the creation of a replacement.”

Cabán attended a protest in Brooklyn earlier this month to rally support for the legislation. She has previously called for the need to defund and disband the NYPD, as well as advocating for Rikers Island to be shut down without the construction of new jails. The Astoria resident has also opposed Mayor Adams’ decision to bring back plainclothes police teams — saying they are ineffective and unfairly target minorities.

Cabán is instead calling for a radically different approach to public safety which would include less policing and encouraging local business owners to get trained in de-escalation tactics should they encounter a conflicting situation.

Cabán, Won, and Krishnan are among the 14 Councilmembers co-sponsoring the bill. It was introduced in May but is currently in committee, having not been put to the floor for a vote.

The Queens Post reached out to Won and Krishnan for comment in relation to the bill but did not receive a response. Won represents the 26th council district in western Queens while Krishnan is the Councilmember for District 25 covering Jackson Heights and Elmhurst.

The move to eliminate the NYPD’s gang database comes at a time when most citywide crime categories have increased this year — with overall crime up 34.4 percent, according to city data. For instance, in the 114th Precinct, which covers much of Cabán’s district, overall crime is up 23.3 percent compared to the same period last year. However, murders are down 62.5 percent and rapes are down 20 percent in her district.

The precinct also includes the Astoria, Woodside, Ravenswood and Queensbridge Houses – NYCHA complexes where there have been several shootings in the past three years.

Councilmember Robert Holden, a staunch supporter of the NYPD, is concerned that, if passed, the bill could lead to even more crime in the city. Holden represents District 30 which covers Ridgewood, Glendale, Maspeth, Middle Village, and parts of Woodhaven and Woodside.

“With the explosion of gang violence claiming so many innocent victims in this city, just who are these council members pretending to protect?” Holden said in a statement to the Queens Post.

“Eliminating the gang database is reckless, irresponsible and will result in even more violence in this city.” Council Member Robert Holden, pictured, is concerned that, if passed, the bill could lead to even more crime in the city. (Photo: John McCarten)

VOTE OUT ALL PROGRESSIVES
as they are really DEMOCRATIC SOCIALISTS.
THEY WANT TO BRING YOU SOCIALISM NOT CAPITALISM OR AMERICAN VALUES. Look at the shape your country is inunder Socialist Joe Biden And Kamala Harris. 71% of the country believes the US is on the wrong track. Look at NY STATE AND CITY going downhill wiyh Crime and quality Iof life. EDUCATIKN STA I heard on News yesterday, NY KIDS juzt under half are orepared for college. One third of kids drop out the first year of college. I had previouslybhear nany kids need remedial courses when they get to college.
How do ourcelected keadets call this a world class EDUCATION ?

they are not naive they know Exactly what they are doing. Stop voing for these democrats.

What are they doing? What is their motivation?

Why do dumb voters elect Julie Won and Tiffany Caban and Shekar Krishnan. ALL democratic Socialists??They are all for No BAIL LAW and defunding and even Disbanding Police in Caban’ s case. AOC is another Lozer Dem. SOCIALIST. Why wpuld votrers want their city to go further downhill.? I JUST don’ t get it. These Pols are anti- American Anti- cop, anti- white , anti- citizen, anti law & order. They are Pro illegal Immigrant however and do more fir them than homeless and ho MMB eless Veterans who fought for freedom for us all. Shame on those voters.

Idiots. Vote them all out.

It’s almost as if they try to do the opposite of what the public wants. Useless Bureaucrats.

Throw the baby out with the bath water, yes, I’m sure that’s the right thing to do. Complete insanity!!!

This is a classic case of ideology of interfering with reality. A list is not a problem. It is how it is used. Our representatives should reflect the opinion of their constituents. Julie Won lives in a safe neighborhood so she doesn’t care. but her constituents do.

ITis not as safe as it used to be in Julie Won’ s district. I LIVE THERE.

As someone that leans heavily left I agree that the list is not the issue.

Hiw can you lean heavily left. Look at your city, it is colla0psing unto itself. Crime, drugs, homelessness,millions for illegals and nothing for Transit except the horrible congrstion pricing idea.Only luxury housing beong built when affordable housing needed. DUMB NO BAIL LAW. etc…. How could you lean LEFT at all. DEMOCRATIC SOCIALISTS HAVE RUINED NY STATE AND CITY.

I agree with Mr. Holden that crime will go up. These progressives are WRONG. THEY ARE DEMOCRATIC SOCIALISTS. STOP VOTING FOR THEM IF YOU WANT PUBLIC SAFETY TO IMPROVE. They all should be voted out

It is very unfortunate that we have people this incompetent, like Caban, pretending represent the residents of Astoria. Shameful.

These people are legit nuts. They get elected to office and think they know everything. Have they studied the possible downsides about this bill? If people are not criminals on this list, figure out a way to remove them if they’re in error. To make a statement that the list is “nothing but a dragnet to surveil and criminalize” is so extreme & irresponsible to her own constituents who are probably equally concerned about a random attack coming around any corner. I wonder if the cops agree or if the victims of some of these criminals agree. When are we going to stop electing these insanely naïve and ignorant politicians into office???

I have said what you said for years on the LIC Post. I HAVE been criticized as a know nothing. NOW IT IS hitting where these Hypocrite Dem. SOCIALISTS LIVE and they complain. They are just like Biden blaming Rep. GOVS FOR sending illegals to sanctuary cities that Bidens open borders have overwhelmed their border towns.Biden is a Hypocrite.He has been flying illegals and busing them unannounced to different parts of the country since late 2021. When reality comes to these Dem. SOCIALISTS they don’ t like it

Yet again, our elected officials doing absolutely nothing to help those they work for. Does Caban realize she can still work to help young people without letting criminals run around committing violent crimes?