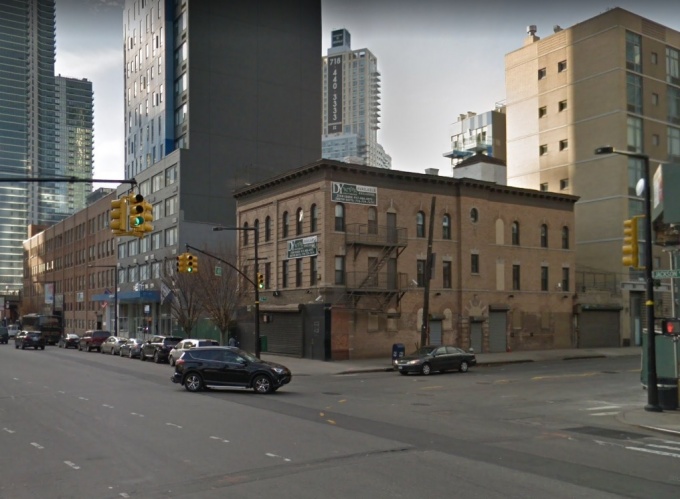 Plans have been filed for a nine-story building at 27-55 Jackson Ave.

The development, which will consist of 40 residential units and ground floor retail space, will replace a prominent three-story brick building on the corner of Jackson Avenue and 42nd Road. The corner building, which was occupied in part by Uber until 2016, went up in 1931.

The new building will be 104 feet tall and yield 32,000 square feet, with about 29,000 feet for residential use and 2,600 for commercial. The plans were filed with the Department of Buildings on Monday.

Five apartments will be located on each floor–from floors 2 through nine.

Nissim Seliktar, the owner of the property, purchased the building for $2.95 million on Jan. 31, 2012. He filed for demolition permits in February.

This stretch of Jackson Avenue has undergone a great deal of development in recent years.

Do what Hong Kong has done. Build an elevated sidewalk on the second floor of all these buildings, interconnect them with pedestrian overpasses and make shopping malls out of the second floors of all the adjoining structures. In Hong Kong, building owners love it because they have another ‘street level’ rentable floor. And pedestrians love it because they can literally walk through the whole neighborhood without actually having to set foot on the street. Businesses love it because they’re suddenly in a mall with high commuter foot traffic. Long Island City was a missed opportunity in civil engineering.

We need a bus route up Jackson Avenue and more bus service that connects LIC to the rest of Queens ! Tell the MTA https://new.mta.info/queensbusredesign

It does need to run more frequently though.

Let us all now lament about how a new building is going up over a previously unused eyesore. The horror

Yes, isn’t it ‘lamentable’ that one-story buildings are being replaced by 9-who knows how many floors, adding to the overcrowding already……

You live in NYC, stop complaining about people.

Too many unaffordable buildings going up. That is the problem. Stores getting kicked out. Why? rents and over development that is why? LICjust sucks. Nowhere for people to shop or enjoy themselves.

Thanks for helping the developers so much!

Just what Jackson Avenue needs to make it look more like Manhattan a heartless, Soulless steel monstrosity. that will produce no stores because of the rents.