An expansive new facility offering indoor beach volleyball—as well as a sports bar and lounge area— has opened in Sunnyside. Pictured are players on court at the facility (Photo provided by Leon Dubov, owner of QBK Sports)

The establishment, called QBK Sports, opened last month on the ground floor of an industrial building at 41-20 39th St.—across the street from the brewpub Alewife.

The 17,000 square foot complex consists of three sand-based beach volleyball courts lined up next to one another. There is also a sports bar and lounge area that comes with a ping pong table.

The entire facility is open plan with a barrier separating the courts from the bar and lounge area.

QBK Sports is owned and operated by Leon Dubov, a former hedge fund manager from Brooklyn. The facility is Dubov’s first venture into the industry and he says he is delighted to bring the new complex to Sunnyside.

He said the reaction from patrons has been positive.

“It’s been going well, there’s been a pretty good response from people so far,” Dubov said. “I am still trying to figure out what our peak and off-peak times are.”

Dubov filled the courts with around 730 tons of high-quality sand sourced from New Jersey. He said the sand makes it easier for players to jump and it also does not scrape or cut the skin.

“The sand is amazing, it is the best you can find in this part of the world,” Dubov said.

Dubov said the facility offers a fun setting where customers of all levels can enjoy playing volleyball. The facility is open seven days a week and all year round—including summer since the space is air-conditioned. There are also three large TVs hanging courtside that act as scoreboards.

Customers can reserve a spot on court via the company website. The spots, known as drop-ins, come in three-hour time slots and are typically priced at $45. However, the company is currently offering a 25 percent discount to celebrate the opening.

Dubov said the facility is open to people of all skill levels and offers a series of instruction classes where residents can learn the basics of how to play. The classes take place on Saturdays from 2 p.m. and on Mondays from 7 p.m.

He said that volleyball leagues at the facility will kick off next month. The leagues come in three categories depending on player skill levels. There will be recreational leagues for beginners as well as intermediate and advanced level leagues.

The facility, Dubov said, also offers a full bar and lounge area where players can hang out after their sessions and mingle. There is seating for around 150 people.

The lounge includes a mezzanine area where residents can watch the volleyball action from a height.

Dubov said the bar has a number of TVs where sports are shown throughout the day. He said residents don’t have to use the volleyball courts to frequent the bar.

“People can just stop by and watch TV or look at the volleyball,” Dubov said.

Dubov said the bar offers a range of beers from local brewers including Alewife, the Montauk Brewing Company and Coney Island Brewery.

Other beers include Stella, Corona and Heineken while the bar also has a range of cocktails on its menu. Fruit juices, smoothies, coffees and energy drinks are also available, he said.

The food menu consists of bite-size offerings such as wings, cheese platters and fried Brussel sprouts.

There is also a breakfast menu consisting of overnight oats and croissants. 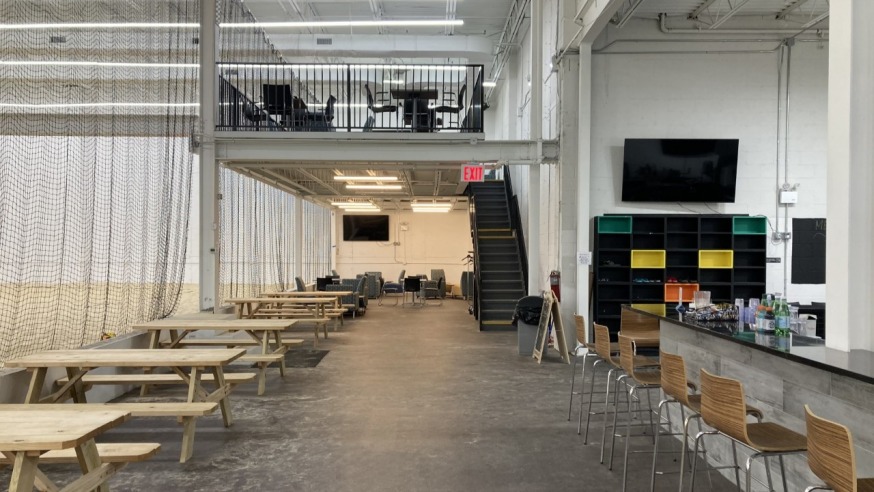 Players on court at the facility (Photo provided by Leon Dubov, owner of QBK Sports)