The Academy of American Studies will soon be operating out of a new building, with a lineup of officials, school staff and civic leaders joining yesterday to celebrate the start of construction on the $118 million project.

The high school, currently split between two “campuses”, with one at the small two-story building at 28-04 41st Ave. and the other at the Newcomers High School building across the street at 28-01 41st Ave., will instead operate out of a new four-story building anticipated to be completed for September 2021.

The new school building will be located at 40-11 28th St., or the backlot of the Newcomers High School, and will seat 969 students in what is being described as a state-of-the art building. 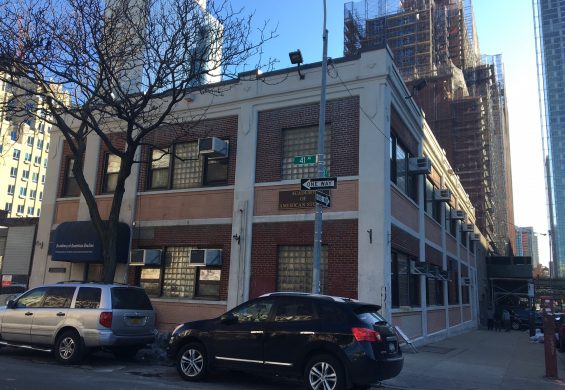 The current school building for the Academy of American Studies. It operates another campus at the Newcomers High School across the street. (Queens Post)

The upcoming building will be fully air conditioned and accessible, and includes 30 standard classrooms and two district special education classrooms.

A “competition-sized” gymnasium with locker rooms also forms part of the new facility, as well as science labs and prep rooms, classrooms for music and art, tech labs, and a library.

The buildout includes an outdoor play area outfitted with four handball courts, a half court for basketball and a reading area.

The groundbreaking ceremony comes more than a year after the School Construction Authority filed plans to build a new, roughly 217,000 square foot school, with the agency noting at the time that the high school’s present building is too old.

Efforts to move students to a new facility, however, apparently go as far back as two decades ago, according to William Bassell, principal of the high school. Back lot of Newcomers High School, where the new Academy of American Studies High School will be built. (Queens Post)

“We are grateful to the many students, who made attaining this new school building their mission, and we are also grateful to Assemblymember Cathy Nolan, whose unswerving guidance and unstinting support helped us to bring this 20 year dream to a vibrant and exciting reality,” Bassell said.

Nolan said she was proud to see the Academy of American Studies “finally” get a proper school building.

It is unclear, however, what will happen to the two-story building that part of the high school currently operates out of.

The school, among the city’s selective public high schools, currently serves more than 1,000 students, according to the Department of Education. Electeds at the Dec. 3 groundbreaking ceremony for the new Academy of American Studies building (via Assemblymember Cathy Nolan’s office)